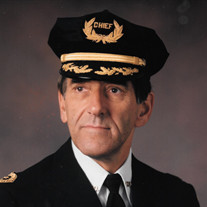 Retired Danvers Police Chief Christ J. Bouras, 85, of Danvers, died late Wednesday evening, September 13, 2017, at the Kaplan Family Hospice House. He was the loving husband of Jean (Moran) Bouras, with whom he shared fifty-four years of marriage. Born in Peabody on May 8, 1932, he was the son of the late James and Elizabeth (Moutsoulas) Bouras. He was raised and educated in Peabody and was a graduate of Peabody High School. He served honorably in the U.S. Navy during the Korean War. Christ began his 44-year career with the Town of Danvers as a patrolman in 1955. He was promoted to Lieutenant in 1962 and Captain in 1976. Appointed Chief in 1979, he served until his retirement in 1999. During his time on the department, he earned his bachelor’s degree in 1972 and his master’s degree in 1974. Under Chief Bouras’ leadership, Danvers was the first municipal police department in the state to become nationally accredited. He served on the Governor’s Anti-Crime Council and the Commission on Medicolegal Investigations. He was a longtime member of the Massachusetts Chiefs of Police Association, and served as president of that association in 1987. He truly loved his job, and was passionate about enhancing police services in his community. Christ was a strong family man and took great pride in both of his children, Christina and Matthew, and especially in his only grandson, Sean. He had a deep love and appreciation of the outdoors. Christ was an avid gardener and loved working the grounds and various gardens within his beautiful property. He and his wife were blessed to be able to travel the world, though his favorite vacations were those spent traveling with his family. Christ was a great believer in daily physical fitness and was still attending Boston North Fitness Center five days a week up through this past June. Christ had a strong zest for life with a love for music, dancing and his many friends. In addition to his wife, he leaves two children, Christina Tinney of Danvers and Matthew Bouras of Boston, his grandson, Sean Tinney of Danvers, a sister, Evangelia Bouras of Danvers, a brother, George Bouras of Nashua, NH, several brothers-in-law and sisters-in-law, nieces, and nephews. He was predeceased by his brothers and sisters Gregory Bouras, Charles Bouras, Peter Bouras, Ethel Alexopoulos, Helen Kessaris, Frances Sanders. The family wants to thank the staff from both the Atrium and the Kaplan Family Hospice House for the loving care and concern that was extended to Christ and his entire family. His Funeral Service will be Wednesday, Sept. 20, 2017 at 10AM in Saint Vasilios Church, 5 Paleologos St., Peabody. Burial will follow in Harmony Grove Cemetery, Grove St., Salem. Relatives and friends are invited. Visiting hours are Tuesday from 4-8PM in C.R. Lyons & Sons Funeral Directors, 28 Elm St., Danvers Square. Donations in Christ’s name may be made to the Christ J. Bouras Scholarship Fund, c/o North East Community Bank, 87 Elm St., Danvers, MA 01923.

The family of Christ J. Bouras created this Life Tributes page to make it easy to share your memories.