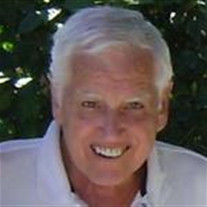 Charles Joseph “Chuck” Powers, of Danvers and Broomfield, CO, passed away peacefully on April 13, 2016 at TRU Community Care Hospice in Louisville, CO surrounded by family. Following his diagnosis of pancreatic cancer in early 2015 he went on to have many fulfilling months with family and friends. His characteristic resolve and tenacity after surgery provided the time to realize his dream of returning to Colorado in March to be with family while reflecting on his life in the Colorado sun. He was born on December 10, 1935 in Danvers to the late Richard James Powers and Mary Agnes (Letarte) Powers. He attended school in Danvers, graduating from Holten High School in 1954. While there he set numerous records running as Captain on the track team, some which were only recently broken, and always enjoyed being active in sports. He graduated from Merrimack College in 1958 with a degree in Business Administration and began a lifelong career in banking and financial services. Through his life he would also be known for the words in his college yearbook saying he had a Colgate smile. He was stationed at Ft. Drum, NY while serving in the Army Reserve following college. He then worked for Household Finance, Security National Bank, was a founding member of Shore Bank in Danvers and finished his 50-year commercial banking career working with and mentoring younger bankers at Salem Five Bank. He was dedicated to his family and community, engaging in numerous civic, religious and school organizations & events. He was an active member of St. Richard Church in Danvers, Board member of the Girl Scouts of America, the Danvers Council on Aging, VNA All Care & Hospice, the Danvers Chamber of Commerce and the Danvers Kiwanis Club. As President of the Danvers Touchdown Club he championed the addition of daughters to the now renowned Father/Son/Daughter Annual Banquet. He is survived by his beloved wife of 47 years, Donna J. (Locke) Powers; his children Deborah Buck and her husband Philip of Mason, OH; Diane Sullivan and her husband Robert of Milton, GA; Kevin Powers and his wife Elizabeth of Haverhill, MA; Daniel Powers and his wife Tara of Boulder, CO; Michael Powers of Ann Arbor, MI and Brendan Powers and his wife Rachel of Ft. Myers, FL. He is also survived by 11 grandchildren and 4 great-grandchildren, as well as his sister Patricia Rogers and her husband Richard of Danvers; his brother Richard Powers and his wife Joan of Cumming, GA; his brother Thomas and his wife Jeanne of Denver, CO and numerous aunts, uncles, cousins, nieces and nephews. He was preceded in death by the late Janet (Devarenne) Powers. His Funeral Mass will be celebrated on Saturday, June 25, 2016 at 11AM in Saint Richard Church, 90 Forest St., Danvers. Relatives and friends are invited. Donations in lieu of flowers to family are requested to be given to the profound efforts of the Massachusetts General Hospital Cancer Center at http://www.massgeneral.org/cancer/support or Massachusetts General Hospital Surgical Research Fund (Carlos Fernandez- del Castillo, M.D.) 15 Parkman Street, WACC 460, Boston MA 02114.

The family of Charles J. Powers created this Life Tributes page to make it easy to share your memories.