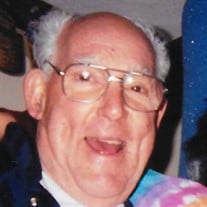 DANVERS- Charles L. Comeau, 88, passed away peacefully on July 11, 2018 in the Kaplan Family House, surrounded by his family. He was the husband of the late Catherine Priscilla (McInnis) Comeau, with whom he shared 61 years of marriage. Born in Providence, RI, he was the son of the late Frank and Alice (Pothier) Comeau. He was raised in South Peabody and graduated from Beverly High and Trade School; Sheet Metal Class of 1947. He served our country with the United States Army during the Korean War. After his discharge, he attended Franklin Technical and Industrial Technical in heating, ventilation, material handling and air conditioning. In 1959 Mr. Comeau started C.L. Comeau Sheet Metal, Inc., until his retirement, when he transferred the ownership to his son, Charles, Jr. He had been a member of the Knights of Columbus and Beverly Power and Sail Squadron. He is survived by his son Charles Comeau Jr. and his wife Jo-Ann, his daughter Cathy Swift and her husband, Peter, five grandchildren, Jessica McWalters and her husband Sean, Jennifer Comeau and her friend, Jeremiah Perkins, Christopher Comeau, Sean Swift and his fiancé, Jennifer Sotomayor and Brian Swift and his wife, Annmarie, his sister, Alice Hayes and three great grandchildren, Riley and Connor McWalters and Jack Swift. He was predeceased by his brothers, Francis, Paul and Edward Comeau. His Funeral Mass will be celebrated at 9AM on Saturday, July 14, 2018 in Saint Mary of the Annunciation Church, 24 Conant St, Danvers. Burial will follow in Annunciation Cemetery, Danvers. Visitation will be held from 4-7PM on Friday, July 13, 2018 at C.R. Lyons & Sons, Funeral Directors, 28 Elm St., Danvers. In lieu of flowers donations may be made in Charles’ name to Care Dimension, 75 Sylvan St., Danvers, MA, 01923.

DANVERS- Charles L. Comeau, 88, passed away peacefully on July 11, 2018 in the Kaplan Family House, surrounded by his family. He was the husband of the late Catherine Priscilla (McInnis) Comeau, with whom he shared 61 years of marriage. Born... View Obituary & Service Information

The family of Charles L. Comeau created this Life Tributes page to make it easy to share your memories.