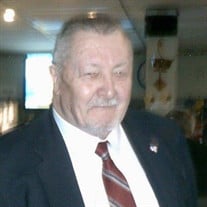 DANVERS- Charles A. Blute, II, 80, passed away with his wife, Nancy, by his side on February 10, 2022. Born in Danvers on February 23, 1941, he was the son of the late Leonard C. and Barbara (Waterman)(Blute) Coffin. Charlie was raised and educated in Danvers and graduated from Holten High School in 1959. He served our country with the United States Army during the Vietnam War and was honorably discharged. He had been a member of the American Legion, Veterans of Foreign Wars and the Vietnam Veterans Post #1. He was also a member of the Beverly and Salem Elks and the Franco-American Club in Beverly. Charlie had been a psychotherapist and human relations director in healthcare. Charlie received his bachelor's degree in sociology from California State University, Northridge. In addition, he received his master’s degree in education from Salem State College. He retired from Catholic Charities in 2003. Charlie was always there for people, he would assist them through their issues, not want anything from it. He worked hard for where he got to in life, no easy rides for Charlie. He was a hardworking, dedicated person. He always commented that he wasn’t perfect, but he got it done and did his best. Charlie was an engaging and caring individual to everyone who knew him. He knew how fortunate he was to enjoy his many friends and he enjoyed sharing his life events. He was proud and honored to share his life with Nancy and their love for each other… resonating faith, hope, and charity in their marriage (referring to her as his 'southern belle' and his 'pioneer woman'). He thoroughly enjoyed New England Sports, WWE and NXT wrestling, playing his favorite computer games, The Salem News crossword puzzles, Nancy's southern fried chicken, homemade biscuits, and most of all music and playing the guitar. In addition to his wife, Nancy, he is survived by his children, Mark and Robin Jones and Charles A. Blute III, his granddaughter Tiffany Vera-Blute and great grandson, Maxi and many nieces, nephews and cousins. He was preceded in death by his siblings, Dennis, Christopher and Adrea Blute. Visitation will be held on what would’ve been his 81st birthday, on Wednesday, February 23, 2022, from 4-7PM at C.R. Lyons & Sons, Funeral Directors, 28 Elm St. Danvers. Military honors will be presented as well as a service by the Beverly-Salem Elks Lodge.

DANVERS- Charles A. Blute, II, 80, passed away with his wife, Nancy, by his side on February 10, 2022. Born in Danvers on February 23, 1941, he was the son of the late Leonard C. and Barbara (Waterman)(Blute) Coffin. Charlie was raised and... View Obituary & Service Information

The family of Charles A. Blute II created this Life Tributes page to make it easy to share your memories.