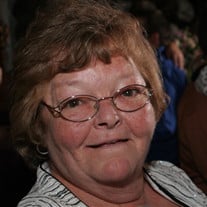 PEABODY- Carol Ann (McLaughlin) Freeman, 71, passed away on March 24, 2016 in Lahey Hospital, Burlington. She was the loving wife of Donald W. Freeman, with whom she celebrated 52 years of marriage, this past Friday. Born in Peabody on July 18, 1944, she was the daughter of Charles and Frances (Farnsworth) McLaughlin. She was raised and educated in Salem and graduated from Salem High School. She and her husband moved to Peabody, where they raised their family. Carol worked with special needs adults in a group home for many years in Peabody. More recently she had worked at the Shaw’s Supermarket in Leominster and Peabody. She enjoyed spending time with her family in the White Mountains and at the family home in East Lowell, Maine. Carol enjoyed going to Bingo, cooking and especially spending time with her family. In addition to her husband, Donald, she is survived by five children, Colleen and her husband Brian LaPierre of Merrimac, Donald Freeman, Jr. of Kittery, Charles Freeman and his wife Daniela of Marlborough, Doreen Gardner and her husband Marc of Peabody and Charlene Guidi and her husband Richard of Peabody, her brother and sister-in-law, Richard and Elaine McLaughlin of Wilmington, sisters-in-law Claire McLaughlin of Danvers and Frances McLaughlin of Peabody, 10 grandchildren, Brad, Heather, Tayla, Jonathan, Thomas, Juliana, Lexi, Kody, Tyler and Cameron, two great grandchildren, Avery and Allie and many nieces and nephews. She was predeceased by her brothers, Edward and Robert McLaughlin. Her Funeral Service will be celebrated at 10AM on Wednesday, March 30, 2016 at Holy Trinity Methodist Church, Sylvan St., Danvers. Burial will follow in Walnut Grove Cemetery, Danvers. Visitation will be held on Tuesday from 4-7PM at C.R. Lyons & Sons, Funeral Directors, 28 Elm St., Danvers. In lieu of flowers expressions of sympathy may be made in Carol’s name to the American Lung Assoc., PO Box 7000, Albert Lea, MN, 56007.

PEABODY- Carol Ann (McLaughlin) Freeman, 71, passed away on March 24, 2016 in Lahey Hospital, Burlington. She was the loving wife of Donald W. Freeman, with whom she celebrated 52 years of marriage, this past Friday. Born in Peabody on July... View Obituary & Service Information

The family of Carol A. Freeman created this Life Tributes page to make it easy to share your memories.