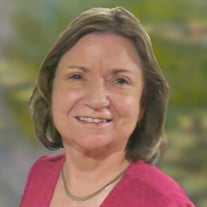 DANVERS-Carol Ann LePage Florendo passed away suddenly on August 20th, 2018 at the age of 71, after a brief but serious illness. She left this world on a high note, close to her friends and family, who will deeply miss her. Carol was a lifelong Danvers native, born to Roger (“Joe”) and Kathryn LePage, along with her sisters Susan, Nancy and Mary (Kathy). She was a student at St. James in Salem and, graduated from Bishop Fenwick in 1963. Her lifelong role as caregiver began at the age of sixteen upon the death of her mother. As the eldest in a single-parent household she helped care for her younger sisters. In the early sixties she spent summers at Hampton Beach, experiencing the freedom and living independently, at the seashore she would come to love. It was here that she met lifelong friends and continued countless adventures sharing life’s journey until her passing. During the mid-sixties she went on to Lynn Hospital School of Nursing to become a registered nurse. Despite the hard studies and rigorous training she forged unbreakable bonds with her classmates to the end of her days. Still passionate about her summers, Carol ventured out to Provincetown, where she soaked in the beach and avant garde scene of the 60s. She rented a tiny cottage, where she indulged her passion for art, the ocean and people. It was during one of these summers that she met her future husband Norbert, who travelled from New York city to Provincetown with similar interests. As if deemed by fate, she and Norbert were married on November 29, 1969, after spending two summers of love together. While Norbert finished college in New York, the newlyweds lived in a six-floor walkup in the Bronx, after which they returned to settle down in Danvers in 1970, where they were blessed with two sons Colin and Christian. Carol continued her career as an RN, working at area hospitals which included many years at the former J.B. Thomas Hospital in Peabody. Eventually she shifted her focus to work as a school nurse at Landmark School in Beverly for twenty-six years, where she delighted in providing care and comfort to the “kids,” and forming lifelong relationships with fellow nurses and co-workers. She touched the hearts of students and staff alike. She felt at home applying her lifelong nursing skills both at Landmark, and more recently Governor’s Academy, and continued to do so up until her illness prevented it. Even while in the hospital herself for her own care, she would instinctively express her nursing and caregiver skills with the medical team and fellow patients. Carol was blessed with two grandchildren, Samantha and Joseph Florendo, who lovingly referred to her as Grandma. Sam & Joe grew up spending their summer vacations with Grandma and Papa every year at their favorite cottage on Hampton Beach. There Carol shared her love of surf, sand and french fries with them, which they will always hold dear in their hearts. She also loved taking them to Topsfield Fair to ride the Himalaya, soak in the New England charm and eat more french fries. Few things brought as much joy to Carol, as to spend time with them and take them places she loved as a child. She shared and admired Sam's artistic talents and described Joey's always-on, always-positive energy as her "force of life". They will always remember these wonderful places and good times with Grandma. In addition to family, friends and co-workers, Carol’s love for animals and all things living great or small was true and endearing, and even they delighted in her presence. Carol found great joy in caring for and playing with her grand-dogs, Saffy, Buster and Doodles. Although the consummate caregiver, Carol’s own passion for life, interests and talent inspired her to venture out and expand through art, literature, dance, yoga, theater and nature. She was an avid reader and adult-learner who never ceased exploring the richness of New England and American history, global cultures, Italian and regional cooking and anything she could discover and share that was truly real, meaningful and life-affirming. Carol made a home for her family that was open to all loved ones and friends, even occasional “new-comers,” making everyone feel welcomed, respected and cared for. The Florendo household was frequently the center for annual gatherings during the holidays. And many were blessed by dropping by to chat and share feelings with Carol, affectionately known by all as “couch-talks.” For her own “guilty pleasures,” Carol had a passion for music, great food (particularly Maine lobsters) and dancing with friends. She loved the ocean, nature and traveled extensively across the country and around the world, Paris being a particular favorite. In addition to her husband, Norbert, of 48 years, she is survived by her two sons and daughters-in-law, Colin and Annie Florendo of Marlborough and Christian and Erika Diehl-Marcus of Los Angeles, CA, her grandchildren, Samantha and Joseph Florendo, her sister, Susan and her husband Francis Kilduff of Salisbury, sister Nancy and her husband John Dembowski of Danvers and sister Kathy Baldini of Salem. Her Funeral Mass will be celebrated at 9 AM on Monday, August 27, 2018 at Saint Richard Church, 90 Forest St., Danvers. Burial will follow in Annunciation Cemetery, Danvers. Visitation will be held on Sunday, August 26, 2018 from 3 to 6 PM at C.R. Lyons & Sons, Funeral Directors, 28 Elm St., Danvers. In lieu of flowers the family requests donations on behalf of the Florendo family to Mass General North Shore Cancer Center, 102 Endicott St., Danvers, MA 01923.

DANVERS-Carol Ann LePage Florendo passed away suddenly on August 20th, 2018 at the age of 71, after a brief but serious illness. She left this world on a high note, close to her friends and family, who will deeply miss her. Carol was a lifelong... View Obituary & Service Information

The family of Carol Ann Florendo created this Life Tributes page to make it easy to share your memories.