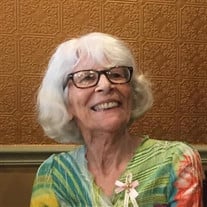 DANVERS- Carmela “Milli” (Panarello) Brown, 87, passed away with family at her side on Saturday. Born, at home, in Chelsea, Massachusetts on June 14, 1930, Milli was the daughter of the late Gaetano and Margaret (Pietracatella) Panerello. Milli was raised and educated in Chelsea and graduated from Chelsea High School. She moved to Danvers in 1960, where she raised her five children. As a woman, mother and friend, Milli, was truly a member of America’s “greatest generation”. She was person that greatly valued family, hard work and integrity. Milli was a person who embraced and shared her Italian heritage; had a great smile and sense of humor and was energized, each and every day, by life, learning and world events. Above all else, Milli was a mother, whose love for her children, grandchildren and great grandchildren had no bounds; each was truly at the epicenter of her life. Milli’s example as a mother and family leader, her foundation of strength and giving; her legacy of love and her gift of endless fond memories will provide her family with personal treasure, a gift like none-other, for each to cherish, reflect and draw upon now and for generations to come. She is survived by her children, Robert Brown and his wife Karen of Topsfield, Kathleen Garey and her husband Stephen of Reading, Mike Brown of Danvers and Carol Hayes and her husband John of Danvers, her sister, Marjorie DiSciullo of Danvers, her sister and brother-in-law Alice and Joseph DeFranco of Sudbury, 12 grandchildren, Jennifer, Matthew and Kimberly, Christine, Brian, Daniel and Caroline, Michael, Timmy and Emily and Brendan and Dylan, 6 great grandchildren, Robby, Olivia, Addison, Max, Leo and Ada. She was predeceased by her son, Daniel Brown and her sister, Marie Russo. Her Funeral Mass will be celebrated at 9AM on Wednesday, August 30, 2017 in Saint Mary of the Annunciation Church, 24 Conant St., Danvers. Burial will follow in Annunciation Cemetery, Hobart St., Danvers. Arrangements made by C.R. Lyons & Sons, Funeral Directors, 28 Elm St., Danvers. In lieu of flowers, donations may be made in Milli’s name to Perkins School for the Blind, Perkins Trust, 175 North Beacon St. Watertown, MA 02472.

DANVERS- Carmela &#8220;Milli&#8221; (Panarello) Brown, 87, passed away with family at her side on Saturday. Born, at home, in Chelsea, Massachusetts on June 14, 1930, Milli was the daughter of the late Gaetano and Margaret (Pietracatella)... View Obituary & Service Information

The family of Carmela "Milli" Brown created this Life Tributes page to make it easy to share your memories.