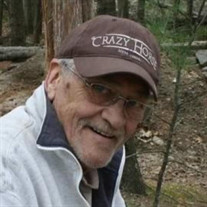 BYFIELD- Carl F. Greenberg, 83, passed away peacefully at home surrounded by his family on February 4, 2022, following a brief illness. Born in Malden, MA on January 18, 1939, he was the son of the late Elmer and Josephine (Williamson) Greenberg and was raised and educated in Malden. He was preceded in death by siblings, Marjorie Braese and Chester Greenberg. Carl proudly served his country in the United States Army as a paratrooper with the 82nd Airborne Division. He was a member of the Local 7 Ironworkers Union in Boston, MA and a grassroots member of the Crazy Horse Memorial Foundation. He had deep respect for Native American culture and the great outdoors. A cross country road trip with his son Jesse, hiking with his brother Ralph, and trips to Alaska, Colorado, and Europe were amongst some of his fondest memories. Carl was a loyal fan of all New England sports teams and loved watching and attending Red Sox games. He treasured his family and friends. He was, and always will be, loved by all. He is survived by six children, Robin Mysliwy (Robert) of Byfield, Leanne White of Danvers, Kerrin Nims of Danvers, Kristin Force of Salisbury, Joy Scotina of NH and Jesse Greenberg (Julie) of CO, his brother and sister-in-law, Ralph and Rita Greenberg of Ipswich, nine grandchildren, Matthew Maloney (Erin) of Danvers, Michael Mysliwy (Liz) of NH, Zachary Mysliwy of Newburyport, Cassidy Force of Haverhill, Rebecca Nims of Danvers, Hailey Force of Salisbury, Eric Jase Freeman of NH, Jesiah Scotina of NH and Jevon Anson of NH, and two great grandchildren, Hadley Maloney and Makai Mysliwy, and several nieces and nephews. Visitation will be held from 11AM-12:45PM on Saturday, February 12, 2022, at C.R. Lyons & Sons, Funeral Directors, 28 Elm St., Danvers. Funeral services to immediately follow at 1PM. In lieu of flowers, donations may be made in Carl’s name to the Crazy Horse Memorial Foundation at https://donate.crazyhorsememorial.org.

BYFIELD- Carl F. Greenberg, 83, passed away peacefully at home surrounded by his family on February 4, 2022, following a brief illness. Born in Malden, MA on January 18, 1939, he was the son of the late Elmer and Josephine (Williamson) Greenberg... View Obituary & Service Information

The family of Carl F. Greenberg created this Life Tributes page to make it easy to share your memories.