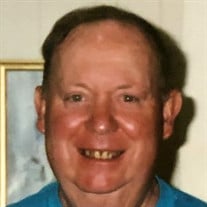 DANVERS- Carl L. Cote, 87, passed away on February 5, 2019 in his home. He was the loving husband of Doris (Saucier) Cote with whom he shared 63 years of marriage. Affectionately known as “Killer Carl,” he was born in Haverhill on August 4, 1931. Carl was the son of the late L. Carl and Irene (Dacey) Cote. He was raised and educated in Haverhill and received his bachelor’s degree from Lowell Technical College. Carl served our country with the United States Army during the Korean War. He was part of five major campaigns including Yalu River during the war and was a member of the 72nd Tank Battalion, C Company. Prior to his service, Carl was Assistant Golf Pro at the Concord (NH) Country Club. Carl was employed with the Commonwealth of Massachusetts Highway Department as a Civil Engineer for 35 years. In addition to his wife, Doris, he is survived by: three children, James Cote and his wife Beth of Danvers, Stephen Cote and his wife Karen of North Reading and Karen Anderson of Danvers; his sisters, Dorothy Ippolito of NH, Irene Tucci of Salisbury and Barbara Quintal of FL; six grandchildren, Stacey and Annie Cote, Sam and Jack Anderson and Josie and Faith Cote; and several nieces and nephews. He was predeceased by his brother Arthur “A.J.” Cote and his sisters, Joan Cote and Mary Lou George. A deep appreciation to Care Dimensions and Life at Home Health Care for all their great care they gave to Carl and his family. His Funeral Service will be held at 11AM on Tuesday, February 12, 2019, at C.R. Lyons & Sons, Funeral Directors, 28 Elm St., Danvers. Burial will follow in Annunciation Cemetery, Danvers. Visitation will be held on Monday from 4-7PM. In lieu of flowers, donations may be made in Carl’s name to St. Jude Children’s Research Hospital, 501 St. Jude Pl, Memphis, TN, 38105 or Alzheimer’s Assoc., 309 Waverley Oaks Rd, Waltham, MA 02452.

DANVERS- Carl L. Cote, 87, passed away on February 5, 2019 in his home. He was the loving husband of Doris (Saucier) Cote with whom he shared 63 years of marriage. Affectionately known as &#8220;Killer Carl,&#8221; he was born in Haverhill... View Obituary & Service Information

The family of Carl L. Cote created this Life Tributes page to make it easy to share your memories.