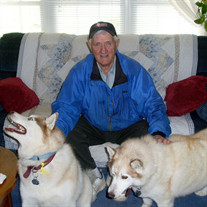 Bruce L. Skinner, 84, of Georgetown, formerly of Danvers, died Thursday, February 18, 2016 at the Merrimack Valley Hospice House in Haverhill. He was the loving husband of Carol (Amnott) Skinner. Born in Danvers on Nov. 12, 1931, he was the son of the late Walton Skinner and Carolyn (Cloutman) Skinner. He was raised and educated in Danvers and resided in Danvers for most of his life. He also made his home in Dudley and Shapleigh, ME before moving to Georgetown in recent years. Bruce served in the U.S. Navy and was a veteran of the Korean War. He was proud to be stationed on the U.S.S. Midway. He was employed at the Peabody Supply Company for twenty-eight years until the time of his retirement and had previously been employed as a union plumber. Bruce was a loving and dedicated father and grandfather and enjoyed many years coaching youth sports in Dudley and Danvers. He loved dogs, and was especially devoted to his late Siberian Huskies, Cinnamon and Cheyenne. In addition to his wife, he leaves his children, Daniel Skinner and his wife Diane of Topsfield, Dana Skinner and his wife Keiko of Georgetown, Darlene Sherry and her companion James Swindell of Danvers, and Donna Ferrera of Salisbury, nine grandchildren, P.J., Danielle, and Kasey Sherry, Blake, Derek, Brie, Alex, and Abby Skinner, and Robert Ferrera, and two step-brothers, Michael and Ronald Skinner. His Funeral Service will be Tuesday, February 23, 2016 at 11AM in C.R. Lyons & Sons Funeral Directors, 28 Elm St., Danvers Square. Burial will follow in Walnut Grove Cemetery, Danvers. Relatives and Friends are invited. Visiting hours are Monday from 4-7PM in the funeral home.

Bruce L. Skinner, 84, of Georgetown, formerly of Danvers, died Thursday, February 18, 2016 at the Merrimack Valley Hospice House in Haverhill. He was the loving husband of Carol (Amnott) Skinner. Born in Danvers on Nov. 12, 1931, he was the... View Obituary & Service Information

The family of Bruce L. Skinner created this Life Tributes page to make it easy to share your memories.