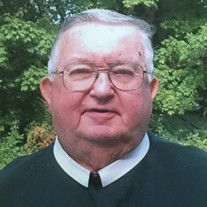 Brother Philip G. White, C.F.X., 94, died Tuesday morning, October 15, 2019 at Xaverian House in Danvers. A member of the Congregation of the Brothers of Saint Francis Xavier for seventy-six years, he had the distinction of being the oldest member of the congregation. Born in Boston on March 21, 1925 to the late Harry and Mary (O’Hare) White, he was a 1942 graduate of Mission Church High School. He entered the Xaverian Brothers the following year, and on August 15, 1943 received the holy habit, taking the religious name Brother Claver. Brother Philip received his bachelor’s degree from Loyola College in Baltimore in 1950 at later earned a master’s degree from Boston College. He went on to do post-graduate studies at Columbia University, Fordham University, and Keene State College. Brother Philip’s teaching ministry began at Baltimore’s Saint Mary’s Industrial School in 1947. In 1950 he took a new assignment at Flaget High School in Louisville, KY. After eight years in Louisville, he served briefly at both Saint Francis de Sales High School in Utica, NY and at Saint John’s Preparatory School in Danvers. In 1961, he began teaching at Cardinal Hayes High School in the Bronx, and in 1970, he received his last active assignment at Malden Catholic High School, where he was a fixture on campus for the following twenty-three years. He had been in residence at Xaverian House since 1993, where he enjoyed the free time to master his skills in woodworking, delighting in the creations he would make to celebrate holidays and share with his fellow brothers and friends. In addition to his brothers in religion, Brother Philip leaves a number of nieces and nephews. He was predeceased by his brothers and sisters, Harry White, Marie Driscoll, Elizabeth Clem, and Robert White. His Funeral Mass will be celebrated on Monday, Oct. 21, 2019 at 3PM in the Chapel of Saint John’s Preparatory School, 72 Spring St., Danvers. Burial will follow in Xaverian Brothers Cemetery, Danvers. Visitation will be prior to the Mass beginning at 2PM. In lieu of flowers, donations in Brother Philip’s name may be made to the Xaverian Brothers Retirement Fund, 4409 Frederick Ave., Baltimore, MD 21229. Arrangements are by C.R. Lyons & Sons Funeral Directors, 28 Elm St., Danvers Square. For directions or to leave a message of condolence, please visit www.LyonsFuneral.com.

Brother Philip G. White, C.F.X., 94, died Tuesday morning, October 15, 2019 at Xaverian House in Danvers. A member of the Congregation of the Brothers of Saint Francis Xavier for seventy-six years, he had the distinction of being the oldest... View Obituary & Service Information

The family of Brother Philip G. White CFX created this Life Tributes page to make it easy to share your memories.