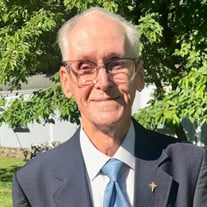 DANVERS—Brother John J. Mahoney, CFX, age 90, a member of the Congregation of the Brothers of Saint Francis Xavier for seventy-two years, died Wednesday evening, March 17, 2021 at the Mary Immaculate Health Center in Lawrence following a period of declining health. Brother John was born in Malden on Nov. 7, 1930 to the late Jeremiah and Josephine (O’Keefe) Mahoney. He was a 1948 graduate of Immaculate Conception Boys’ Catholic High School in Malden and entered the congregation in September of the same year. On March 19, 1949, he received the holy habit and was given the religious name Brother Crispin. Brother John received his bachelor’s degree from Catholic University in 1954 and in 1965 received a master’s degree from Fordham University. His early teaching ministry brought him first to Mount St. Joseph High School in Baltimore and then to Cardinal Hayes High School in the Bronx. After serving as Dean of Xaverian College in Silver Spring, MD for five years, he returned to classroom teaching in 1970 at Saint John’s High School in Washington, DC and then Good Counsel High School in Wheaton, MD. In 1983, Brother John began work in migrant ministry in the Diocese of Raleigh, NC and then served at a missionary in Haiti for more than a decade with the Little Brothers of the Incarnation in Hinche. In 2001, Brother John retired to the Xaverian Brothers community in Baltimore where he was engaged in several volunteer activities over the years. Since 2017, he had been a resident of Xaverian House in Danvers. He leaves several nieces and nephews and his brothers in religion. He was predeceased by his siblings Eugene, Margaret, Josephine, Jeremiah, and Brother James, CFX. Funeral services will be held privately, and burial will be in the Xaverian Brothers Cemetery, Danvers. In lieu of flowers, donations in his memory made be made to the Xaverian Brothers Retirement Fund, 4409 Frederick Ave., Baltimore, MD 21229. Arrangements are by C.R. Lyons & Sons Funeral Directors, 28 Elm St., Danvers Square.

The family of Brother John J. Mahoney C.F.X. created this Life Tributes page to make it easy to share your memories.