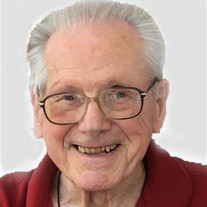 Brother James. M. Mahoney, C.F.X., 85, died Thursday, December 20, 2018 at the Maristhill Nursing Center in Waltham. He had been a member of the Congregation of the Brothers of Saint Francis Xavier for sixty-eight years. Born in Malden on Feb. 16, 1933, he was the son of the late Jeremiah and Josephine (O’Keefe) Mahoney. He was raised and educated in Malden and was a graduate of Malden Catholic High School. He entered the Xaverian Brothers in September of 1950 and on March 19, 1951, received the holy habit, taking the religious name Brother Shamus. Brother James received his bachelor’s degree from Catholic University and master’s degrees from Catholic University and Purdue University. A lifelong learner, he completed further graduate studies at a number of universities including Fordham, Cornell, and Boston University. His teaching ministry began in 1956 at Saint John’s Preparatory School in Danvers. In 1961 he accepted an assignment at Cardinal Hayes High School in the Bronx, and two years later found himself at Notre Dame High School in Utica, NY. His next assignment began in 1970, where he spent the following six years teaching at his alma mater, Malden Catholic High School. He then taught at St. Joseph Regional High School in Montvale, NJ and Xaverian Brothers High School in Westwood until 1987, when he went to Saint John’s High School in Shrewsbury, where he would spend the remainder of his teaching career. He retired in 2001 and remained in the brothers’ community in Shrewsbury until 2014 when he became a member of the community at Xaverian House in Danvers. Brother James is survived by his older brother, Brother John Mahoney, C.F.X., of Danvers, his religious brothers around the world, and several nieces and nephews. He was predeceased by his siblings Eugene, Margaret, Josephine, Patricia, and Jeremiah. His Funeral Mass will be celebrated on Weds., December 26, 2018 at 11AM in the Chapel of Saint John’s Preparatory School, 72 Spring St., Danvers. Burial will follow in Xaverian Brothers Cemetery, Danvers. Relatives and friends are invited. Visitation will begin prior to Mass at 10AM. In lieu of flowers, donations may be made to the Xaverian Brothers Retirement Fund, 4409 Frederick Ave., Baltimore, MD 21229.

Brother James. M. Mahoney, C.F.X., 85, died Thursday, December 20, 2018 at the Maristhill Nursing Center in Waltham. He had been a member of the Congregation of the Brothers of Saint Francis Xavier for sixty-eight years. Born in Malden on... View Obituary & Service Information

The family of Brother James M. Mahoney C.F.X. created this Life Tributes page to make it easy to share your memories.