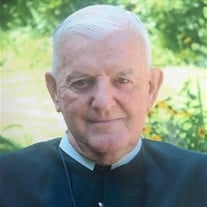 Brother Edwin Boissonneau, C.F.X., 95, a member of the Congregation of the Brothers of Saint Francis Xavier for seventy-eight years, died Saturday, August 25, 2018. Born Patrick J. Boissonneau in Black Lake, Quebec, Canada on September 7, 1922, he was the son of the late Odilon and Orea (Langlois) Boissonneau. He was raised in Malden and attended Malden Catholic High School before transferring to Saint Joseph Juniorate in Peabody, where he joined the Xaverian Brothers on February 14, 1940. Six months later, he received the holy habit and took for his religious name Brother Edwin. Brother Edwin began his studies at Catholic University in Washington, DC and earned a bachelor’s degree from Saint John’s University in Brooklyn in 1948. He returned to Saint John’s to take a master’s degree in 1953 and later did further studies at both Laval University in Quebec and Rivier College in Nashua. His teaching ministry began at Saint Matthew’s School in Brooklyn in 1944. From there, Brother Edwin took his first high school assignment in 1947 at Mount Saint Joseph High School in Baltimore. In 1949, he returned to Brooklyn to teach at St. Michael’s Diocesan High School. In 1956, he received his first of three assignments at Saint John’s Preparatory School in Danvers, being named Director of Studies. After two brief assignments at Xaverian High School in Brooklyn and Xaverian College in Silver Spring, MD, Brother Edwin returned to Saint John’s Prep, teaching French until 1969 when he took a missionary assignment at Mumias Secondary School in Kenya. Coming back to St. John’s Prep in 1975, he taught French until his retirement in 1993. Since 1997, he had been in residence at Xaverian House in Danvers. In addition to his classroom responsibilities, Brother Edwin coached tennis for many years, a game he loved and played into his eighties. In addition to his brothers in religion, he leaves several nieces and nephews. He was predeceased by his siblings Irene Lamson, Fernande Curtis, and Roland and Roger Boissonneau. His Funeral Mass will be celebrated on Tuesday, August 28, 2018 at 11:30AM in the Saint John’s Preparatory School Chapel. Burial will follow in Xaverian Brothers Cemetery. Visitation is prior to Mass beginning at 10AM. In lieu of flowers, donations in Brother Edwin’s name may be made to the Xaverian Brothers Retirement Fund, 4409 Frederick Ave., Baltimore, MD 21229.

The family of Brother Edwin Boissonneau C.F.X. created this Life Tributes page to make it easy to share your memories.

Brother Edwin Boissonneau, C.F.X., 95, a member of the Congregation...