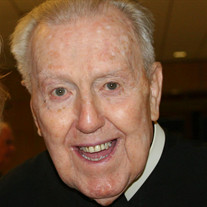 Brother Bede Benn, C.F.X., 95, the oldest member of the Congregation of the Brothers of Saint Francis Xavier, which he served faithfully for 77 years, died Tuesday, May 10, 2016 at the Hathorne Hill Rehab. Center in Danvers. Born Joseph R. Benn on July 31, 1920, he was the son of the late Hugh and Nora (Petty) Benn. He attended Saint Joseph Juniorate in Peabody and entered the Xaverian Brothers in 1939, taking the name Brother Bede. He studied at the Catholic University of America and received his bachelor’s degree from Loyola University in Baltimore. A master’s degree followed in 1955 and he later did further graduate studies at Boston College and Bridgewater State College. His teaching ministry brought him first to St. Francis de Sales High School in Utica, NY and then to Saint John’s High School in Worcester/Shrewsbury. He then taught at Boys’ Catholic High School in Malden and Xaverian Brothers High School in Westwood before volunteering with a group of Xaverian Brothers to teach and minister to the Lakota Sioux at the Saint Francis Mission in South Dakota. After nearly thirty years in South Dakota, he returned to Malden Catholic where he continued tutored until 2009. He had resided at Xaverian House in Danvers since 2009. He leaves numerous nieces and nephews in addition to his brothers in religion. He was predeceased by his siblings Hugh Benn, Susan Byrne, George Benn, Sr., and Mary Gogain. His Funeral Mass will be celebrated on Saturday, May 14, 2016 at 11AM in the Chapel of Saint John’s Preparatory School, 75 Spring St., Danvers. Burial will follow in Xaverian Brothers’ Cemetery, Danvers. Visiting hours in the Chapel prior to the Mass from 9-11AM. Relatives and friends are invited. In lieu of flowers, donations may be made to the Xaverian Brothers’ Haitian Ministries, 4409 Frederick Ave., Baltimore, MD or the St. Francis Mission Foundation, 201 Main Street, Suite 310 Rapid City, SD 57701, where Brother Bede worked for more than twenty years. www.LyonsFuneral.com.

Brother Bede Benn, C.F.X., 95, the oldest member of the Congregation of the Brothers of Saint Francis Xavier, which he served faithfully for 77 years, died Tuesday, May 10, 2016 at the Hathorne Hill Rehab. Center in Danvers. Born Joseph R.... View Obituary & Service Information

The family of Brother Bede Benn, C.F.X. created this Life Tributes page to make it easy to share your memories.

Brother Bede Benn, C.F.X., 95, the oldest member of the Congregation...