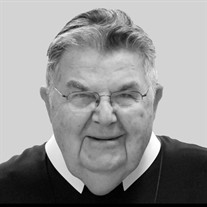 Brother Arcadius Alkonis, C.F.X., 88, died Monday evening, September 30, 2019. He had been a member of the Congregation of the Brothers of Saint Francis Xavier for seventy-one years. Born Alfred S. Alkonis in Lynn on December 20, 1930, he was the son of the late Stanley and Anna (Hallwich) Alkonis. He was raised and educated in Lynn where he was a 1948 graduate of Saint Mary’s High School. On September 19, 1948 he entered the Congregation of the Xaverian Brothers and the following March 19th he received the holy habit, taking the name Brother Arcadius. Brother Arcadius received his bachelor’s degree from Saint John’s University in New York. His teaching ministry began in 1952 in Brooklyn, where he taught at Holy Cross School and St. Teresa’s Boy’s School until 1958. Following brief assignments at St. Joseph’s High School in Bardstown, KY and Cardinal Hayes High School in the Bronx, Brother Arcadius accepted an assignment as a missionary, teaching in the Xaverian Brothers schools in Kenya until 1985. Returning to the United States, Brother Arcadius arrived at Saint John’s Preparatory School in Danvers in 1985 and quickly found his niche as a beloved school librarian. Even after his retirement, Brother Arcadius volunteered in the school’s library until ill health set in two years ago. A member of the Catholic Archivists Association, Brother Arcadius was instrumental in the maintenance of both the St. John’s Prep archives and those of the Xaverian Brothers. During his time at the Prep and in residence at Xaverian House, Brother Arcadius served the community as sacristan and was devoted to the care of the brothers’ cemetery. He enjoyed planting flowers around Xaverian House, beautifying the grounds for his confreres. In addition to his brothers in religion, he leaves a sister, Doris Rogalski of Marblehead, and many nieces and nephews. He was predeceased by his sister Alice Krisiak. His Funeral Mass will be celebrated on Saturday, October 5, 2019 at 10:30AM in Saint Richard Church, 90 Forest St., Danvers. Relatives and friends are invited. Visiting hours are in Saint Richard Church prior to Mass from 9:00-10:15AM. Burial in Xaverian Brothers Cemetery will be private. In lieu of flowers, donations in Brother Arcadius’ name may be made to the Xaverian Brothers Retirement Fund, 4409 Frederick Ave., Baltimore, MD 21229.

Brother Arcadius Alkonis, C.F.X., 88, died Monday evening, September 30, 2019. He had been a member of the Congregation of the Brothers of Saint Francis Xavier for seventy-one years. Born Alfred S. Alkonis in Lynn on December 20, 1930, he... View Obituary & Service Information

The family of Brother Arcadius Alkonis C.F.X. created this Life Tributes page to make it easy to share your memories.