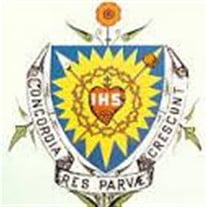 Brother Albert C. Bozzo, C.F.X., 84, died Monday, April 13, 2015. He had been a member of the Congregation of the Brothers of Saint Francis Xavier for sixty-five years. Born in New York on Nov. 4, 1930, he was the son of the late Emil and Rose (Repetti) Bozzo. He was raised and educated in New York and was a graduate of St. Michael’s Diocesan High School in Brooklyn. He entered the Xaverian Brothers in September of 1949 and received the holy habit the following March, taking the religious name Brother Alberto. Brother Albert matriculated to Catholic University where he earned a bachelor’s degree in 1955 and in 1968 received a master’s degree in teaching. He would further his education with studies at Nazareth College, Bellarmine College, Brown University, and Loyola University in New Orleans. His apostolic ministry would bring him first to St. Xavier High School in Louisville, KY from 1955 until 1961 when he was assigned to a teaching position at Our Lady of Good Counsel High School in Wheaton, MD. He returned to Louisville where he taught for several years at Flaget High School. In the 1980s, Brother Al served in the Xaverian Brothers' Provincial Office and returned to teaching at the Learning Bank in Baltimore where he was a tutor and substitute teacher from 1993-2006. During this time, Brother Al was recognized with a Teacher/Instructor Award from the Maryland Association for Adult Community Education and a Governor’s Volunteer Service Award for his dedication to his students. He had been in residence at Xaverian House in Danvers since 2006. In addition to his brothers in religion, he leaves a brother, Brother Edward Bozzo, C.F.X. of Melrose. He was predeceased by his siblings, Emil, John, Elvira, and Evelyn. His Funeral Mass will be celebrated on Wednesday, Apr. 15, 2015 at 4PM in the Chapel of Saint John’s Preparatory School, 72 Spring St., Danvers. Burial will follow in Xaverian Brothers Cemetery, Danvers. Visitation will be prior to the Funeral Mass from 3-4PM. In lieu of flowers, donations may be made to the Xaverian Brothers Retirement Fund, 4409 Frederick Ave., Baltimore, MD 21229.

Brother Albert C. Bozzo, C.F.X., 84, died Monday, April 13, 2015. He had been a member of the Congregation of the Brothers of Saint Francis Xavier for sixty-five years. Born in New York on Nov. 4, 1930, he was the son of the late Emil and Rose... View Obituary & Service Information

The family of Brother Albert C. Bozzo C.F.X. created this Life Tributes page to make it easy to share your memories.