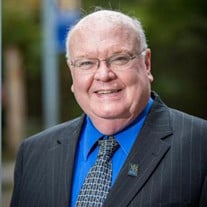 Brother Raymond E. Hoyt, Jr., C.F.X., 64, died Monday morning, October 9, 2017 at the Kaplan Family Hospice House in Danvers following a fifteen-month battle with ALS. Born in Jamaica Plain on Feb. 28, 1953, he was the son of Raymond E. Hoyt, Sr. of Roslindale and the late Frances (Robar) Hoyt. Graduating from Xaverian Brothers High School in 1970, he entered the Congregation of the Brothers of Saint Francis Xavier in September of 1971, making his perpetual profession on Sept. 20, 1980. He received his bachelor’s degree from Boston College in 1975, and returned to BC for graduate studies, earning a master’s degree in 1981. In a teaching ministry that spanned more than four decades, twenty-two of those years were spent as an assistant principal at his alma mater where he was a dedicated and cherished member of the community. Prior to his time at Xaverian, he taught at both St. John’s High School in Shrewsbury and Xavier High School in Middletown, CT and served as principal of Holy Trinity Catholic School in Orangeburg, SC. His time in Westwood was interrupted for two years, when he served as principal of St. Xavier High School in Louisville, KY from 2001-2003. In addition to his brothers in religion, he leaves a sister, Elaine Moses of Roslindale, three brothers, Russell of Walpole, Randy of Hudson, NH, and Robert of Concord, and several nieces and nephews. His Funeral Mass will be celebrated on Saturday, Oct. 14, 2017 at 10AM in Saint Timothy Church, 650 Nichols St., Norwood. Burial will be in Xaverian Brothers Cemetery, Danvers. Visiting hours are Friday from 4-7PM in the Chapel at Xaverian Brothers High School, 800 Clapboardtree St., Westwood. In lieu of flowers, donations in Brother Raymond’s name may be made to the Brother Raymond Hoyt Scholarship Fund, c/o Xaverian Brothers High School, 800 Clapboardtree St., Westwood, MA 02090. Arrangements are by C.R. Lyons & Sons Funeral Directors, 28 Elm St., Danvers. www.LyonsFuneral.com.

The family of Bro. Raymond E. Hoyt C.F.X. created this Life Tributes page to make it easy to share your memories.