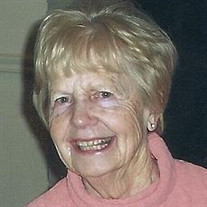 Mary Elizabeth “Betty” Perkins, 85, died Sunday, June 7, 2015 following a lengthy illness surrounded by her loving family. She was the loving wife of the late Norris Perkins, who predeceased her in 1999. Born in Beverly on Jan. 23, 1930, she was the daughter of the late Edward and Alice (Lucas) Mallon. She was raised and educated in Manchester-by-the Sea and was a graduate of Story High School in Manchester and Fisher Junior College. Prior to her marriage, Betty was employed at the former United Shoe in Beverly, and after her children had grown, worked at the Salem Commercial School and then Hogan Regional Center until the time of her retirement. A longtime Danvers resident, Betty was a proud Republican who was a faithful contributor to the Letters to the Editor page. She enjoyed travel and was an author who published two books. Most of all, Betty was dedicated to her family. Whether it was the PTA, teaching Sunday school at the Maple Street Church, or being a Girls Scout leader, family was everything to her. She leaves three daughters and their husbands, Dr. Elaine M. and James Bird, Patricia A. and George Chace Jr., and Linda E. and Charles Angeramo Jr., her grandchildren, Michael and Laura Bird, Kimberly Bird, Kristin Thomas, Matthew and Cheryl Chace, Kerri Chace, Kara Shallow, Ryan Shallow, and Grace Angeramo, five great-grandchildren, three sisters, Connie Accomando of Beverly, Faith Schirm of Los Gatos, CA, and Joan Wogan of Manchester-by-the-Sea, and several nieces and nephews. Her Funeral Service will be Thursday, June 11, 2015 at 10AM in the Maple Street Congregational Church, 90 Maple St., Danvers. Burial will follow in Walnut Grove Cemetery. Relatives and friends are invited. Visiting hours are Wednesday from 4-8PM in C.R. Lyons & Sons, Funeral Directors, 28 Elm St., Danvers Square. In lieu of flowers, donations in Betty’s name may be made to Care Dimensions, 75 Sylvan St., Danvers, MA 01923.

Mary Elizabeth &#8220;Betty&#8221; Perkins, 85, died Sunday, June 7, 2015 following a lengthy illness surrounded by her loving family. She was the loving wife of the late Norris Perkins, who predeceased her in 1999. Born in Beverly on Jan.... View Obituary & Service Information

The family of Betty Perkins created this Life Tributes page to make it easy to share your memories.