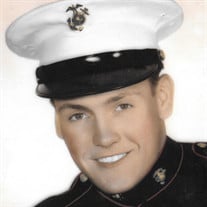 DANVERS- Bertram A. Russell, Jr., 86, peacefully passed away surrounded by his family and his faithful canine companion, Gunny, on December 17, 2018 in his home. He was the devoted husband of the late Priscilla (Allen) Russell with whom he shared over 65 years of marriage. Born in Beverly on December 15, 1932, he was the son of the late Bertram and Annabella (Mac Dearmid) Russell. He was raised and educated in Beverly and moved to Danvers in the late 1950’s. Bert served his country with the United States Marine Corp during the Korean War and was honorably discharged. Bert was awarded two Purple Hearts, Marine Commendation with Gold Valor, Combat Action Ribbon, Korean Service Medal 3 Battle Stars, Navy Presidential Unit Citation, Korean Defense Service Medal, Korean Presidential Unit Citation, Republic of Korea War Service, Marine Corps Overseas Service Ribbon, United Nations Medal, Marine Corps Good Conduct Medal 3 Stars and Selected Marine Corps Reserve Medal. Bert served his community as a patrolman with the Danvers Police Department for over 27 years. In retirement he worked for many years at the Danvers YMCA. He was extremely active within his community, heading up the Toys for Tots Drive. He was a member of the Essex Country Marine Corps League and a past member of the Blue Knights. Bert was a longtime member of the Holy Trinity Methodist Church in Danvers. He had been the Grand Marshall of the Memorial Day Parade in Danvers and had been named Citizen of the Year. He is survived by four children, Mark Russell and his wife, Maureen of Danvers, Brian Russell of Peabody, Wanda Pierce and her husband, Michael of Danvers and Bertram Russell III and his fiancé Donna Diefendorf of Salem, NH, his grandchildren, Tara, Ian and Annie Barone, Jonathan Pierce, Melissa Pennellatore, and Mary Ellen Lear, his great grandchildren, Leah, Abby, Bella, Max, Lilah, Jonathan, Samantha and Meaghan and Charles. He was predeceased by his son, Kevin Russell, his daughter-in-law, Shirley Russell and his sisters, Priscilla Roberts and Katherine Kereluk. Bert’s family would like to thank his caregiver, Lucia Webb and the nurses at Middlesex East Visiting Nurse Hospice, Tara, Danielle, Cheryl and Jill. Visitation will be held from 4-8PM on Thursday, December 20, 2018 at C.R. Lyons & Sons, Funeral Directors, 28 Elm St., Danvers. A private burial will take place in the spring. In lieu of flowers donations may be made in Bert’s name to Danvers YMCA for Campership, 34 Pickering St., Danvers, MA, 01923 or the Middlesex East Visiting Nurse Hospice c/o Gift Processing Center, 41 Mall Rd., Burlington, MA, 01805.

DANVERS- Bertram A. Russell, Jr., 86, peacefully passed away surrounded by his family and his faithful canine companion, Gunny, on December 17, 2018 in his home. He was the devoted husband of the late Priscilla (Allen) Russell with whom he... View Obituary & Service Information

The family of Bertram A. Russell Jr. created this Life Tributes page to make it easy to share your memories.