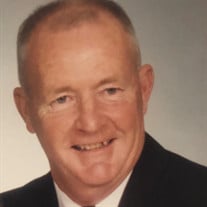 Bernard M. McCarthy, 83, formerly of Danvers, died peacefully on Friday, January 10, 2020 at the Edith Norse Rogers Memorial Hospital in Bedford surrounded by his loving family. He was the husband of the late Jane E. (Dustin) McCarthy, with whom he shared fifty-nine years of marriage until her passing in March, 2018. Born in Brookline on December 30, 1936, he was the son of the late Bernard and Mary (Kirwan) McCarthy. Bernard proudly served his country as a member of the United States Marine Corps. In later years, he was involved with Toys for Tots and was Commandant of the Marine Corps League in The Villages, FL. Bernard was best known for having owned and operated the Port Marina beside Pope’s Landing in Danversport during the 1970’s and early 1980’s. He worked hard all his life to provide for his family. He was known for his quick wit and sense of humor. Bernard and Jane retired to Florida in pursuit of his passion for boating and sunshine. He is survived by and will be deeply missed by his children, Loreen Coppinger and her husband Brian of Ft. Worth, TX, Michael and Rose McCarthy of Danvers, MaryBeth and Michael Martinello of Atkinson, NH; his grandchildren, Patrick Coppinger of Englewood, CO, Brianna Thompson of Pflugerville, TX, and Jacob Martinello of Atkinson, NH. In addition to his wife and parents, he was predeceased by his grandson, Kevin Michael McCarthy and two siblings, Jeremiah McCarthy and Cecilia Cleary. His Funeral Service will be Monday, January 20, 2020 at noon in C.R. Lyons & Sons Funeral Directors, 28 Elm St., Danvers Square. Relatives and friends are invited. Visiting hours are prior to the service from 10:00AM until 11:45AM. In lieu of flowers, donations in Bernard’s memory may be made to the Alzheimer’s Association, 309 Waverley Oaks Rd, Waltham, MA 02452. For directions or to leave a message of condolence, please visit www.LyonsFuneral.com.

Bernard M. McCarthy, 83, formerly of Danvers, died peacefully on Friday, January 10, 2020 at the Edith Norse Rogers Memorial Hospital in Bedford surrounded by his loving family. He was the husband of the late Jane E. (Dustin) McCarthy, with... View Obituary & Service Information

The family of Bernard M. McCarthy created this Life Tributes page to make it easy to share your memories.