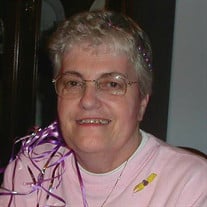 Aurora C. “Ora” (Girard) Perry, 77, passed away peacefully Thursday evening, August 4, 2016 with her family by her side, following a period of declining health. She was the wife of the late Robert D. Perry Sr. Born in Lynn on January 3, 1939, she was the daughter of the late Leo and Rose (Chabot) Girard. She was raised and educated in Lynn and was a graduate of the former St. Jean Baptiste High School. A longtime Danvers resident, she was a communicant of St. Richards Church. Mrs. Perry loved to crochet and sew. For nearly twenty years she had been employed at Windmill Fabrics where she enjoyed helping customers with their projects. She took great pride in the curtains, pillows and other items she made to not only decorate her home, but many others as well. Aurora was a strong woman and a great friend to many. But more than anything else, she was a devoted Mom and advocate for her son Richard D. Perry, of Danvers, who was born with Downs Syndrome. She made sure had everything he needed to live a full and healthy life at home with her and her family. In addition she also leaves another son, Robert D. Perry, Jr. and his wife Ava Markey of Auburn, ME, a daughter, Diana (Perry) Provencher of Stratham, NH, a granddaughter, Kate Markey of Auburn ME, a sister, Lucille Kerrins of Lynn, and several nieces and nephews. She was the sister of the late Clement and Lionel Girard and Laurieann Flynn. Her Funeral Mass will be celebrated on Friday, August 12, 2016 at 10AM in Saint Richard Church, 90 Forest St., Danvers. Burial will follow in Annunciation Cemetery. Relatives and friends are invited. Visiting Hours are Thursday from 5-8PM in C.R. Lyons & Sons Funeral Directors, 28 Elm St., Danvers Square. In lieu of flowers, donations in Mrs. Perry’s memory may be made to Bass River, Inc., 437 Essex St., Beverly, MA 01915.

Aurora C. &#8220;Ora&#8221; (Girard) Perry, 77, passed away peacefully Thursday evening, August 4, 2016 with her family by her side, following a period of declining health. She was the wife of the late Robert D. Perry Sr. Born in Lynn on January... View Obituary & Service Information

The family of Aurora C. Perry created this Life Tributes page to make it easy to share your memories.