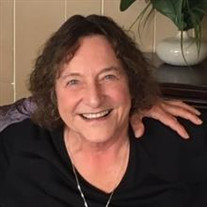 Audrey (Burkey) Iarocci, a resident of Topsfield for 53 years, died on March 25, 2019 at age 82 after a courageous battle with cancer. She was married to her soul mate, Joseph C. Iarocci, for over 50 years, until his passing in 2009. Audrey met Joe when they were both attending Marquette University as Journalism majors. Upon graduation, they started their family in Milwaukee and eventually settled down in their beloved town of Topsfield. While raising her five children, Audrey held a variety of professional positions. Throughout the Sixties and Seventies, she was a reporter for several local papers including The Salem Evening News and The Beverly Times. At the same time, she served as a dispatcher for the Topsfield Police and Fire Departments. She also worked in the Masconomet School System as a paraprofessional and tutor. Her final professional stint was as a member of the Administrative Group at MIT-Bates Linear Accelerator Center, part of MIT’s Laboratory for Nuclear Science, in Middleton, Massachusetts. She retired from Bates in 1996. Audrey was a proud and active member of the Topsfield community throughout her many years living there. She was a Town Library Trustee, serving as Chairman from 2017-2018. She was a member of the Board of Directors for The Topsfield-Boxford Community Club, and was a Founding Member of the Friends of the Topsfield Library and the Council on Aging. Audrey’s commitment to the community did not stop there. She served on the Wallace Kneeland Award Committee, the Masconomet Regional High School Scholarship Committee, was a frequent town polls worker, and an active member of the Historical Society. She also volunteered her time shelving books at the Topsfield Library and working at the Box-Top Shop. Audrey found enjoyment spending time with her children and grandchildren, her dear friends from Topsfield and up on “The Hill”, catching up on the latest Judge Judy episode, finding bargains at the Box-Top Shop, watching all sports (especially the Marquette Golden Eagles), and participating in her weekly bowling league. She survived by her sons Joseph J. Iarocci and wife Laura of Atlanta, GA, Stephen Iarocci and wife Donna of Los Angeles, CA, Michael Iarocci and wife Loree of Plymouth, MA; and her daughters Louise Santosuosso and husband Edward of North Reading, MA and Emily Iarocci and husband Douglas Parigian of Andover, MA. She will also be sadly missed by her 15 grandchildren: Alex, Allison, Laura Caroline, Haley, Stephen, Isabella, Michael, and Andrew Iarocci; Brian, Timothy, and Leanne Anderson; Olivia and Emma Santosuosso; Alexander and Mae Parigian; and 4 great-grandchildren: Fynn, Sloan and Nash Viola and Elianna Iarocci. Her Funeral Mass will be celebrated at 10AM on Saturday, March 30, 2019 in Saint Rose of Lima Church, Park St., Topsfield. Burial will follow in Pine Grove Cemetery, Topsfield. Relatives and friends are invited. Visiting hours will be held from 4-7PM on Friday, March 29, 2019 at C.R. Lyons & Sons, Funeral Directors, 28 Elm St., Danvers Square. In lieu of flowers, donations may be made in Audrey’s name to the American Cancer Society’s Relay for Life, Tri-town (relayforlife.org/tritownma, general donation).

Audrey (Burkey) Iarocci, a resident of Topsfield for 53 years, died on March 25, 2019 at age 82 after a courageous battle with cancer. She was married to her soul mate, Joseph C. Iarocci, for over 50 years, until his passing in 2009. Audrey... View Obituary & Service Information

The family of Audrey B. Iarocci created this Life Tributes page to make it easy to share your memories.

Audrey (Burkey) Iarocci, a resident of Topsfield for 53 years,...