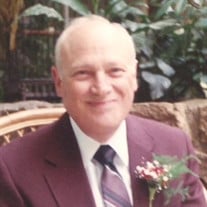 DANVERS- Attilio A. “Bud” Capra, 92, passed away on November 17, 2017 in Beverly Hospital. He was the husband of the late Mary (Nowak) Capra with whom he shared 43 years of marriage. Born in New Bedford on February 3, 1925, he was the son of the late Attilio and Ambrosia “Alice” (Matrona) Capra. Bud was raised and educated in New Bedford and Lynn, MA. He graduated from Lynn English High School, class of 1943. He served our country during WWII with the United States 146 Army Band during the Rhineland Central Europe campaign. He received the Good Conduct and Victory medals; the Middle Eastern Theater Campaign ribbon and was honorably discharged in 1946. His love of music led him to The New England School of Music where he earned his Bachelor of Arts degree; and Boston University School of Arts where he received his Master’s in Music Education. He taught in the Danvers Public Schools as a music teacher and band leader, retiring from the high school after 38 years. He played the trumpet and was a member of a variety of performance groups including big bands, military bands, dance orchestras, small combos and several marching bands. In his retirement, he enjoyed walking, reading and working part-time as a security guard at the former Parker Brothers, Verizon and Target Stores. He is survived by his son, Paul M. Capra of Danvers, MA.; his daughter and son-in-law, Laurie and Brian Landers of Amesbury, MA.; his granddaughter, Erika Landers of Amesbury, MA.; and three nieces; Elaine and Ronald Pare of Salem, MA., Linda and Roger Wilkinson of Stratham, N.H., and Paula and Brian Santapaula of Lynn, MA. He was predeceased by his dear sister, Norma Laterza. His Funeral Service will be held at 10AM on Monday, November 27, 2017 at C.R. Lyons & Sons, Funeral Directors, 28 Elm St., Danvers. Visitation will be held one hour prior to the service from 9-10AM on Monday. Burial will take place in Annunciation Cemetery, Hobart St., Danvers. In lieu of flowers, donations may be made in Attilio’s name to Windrush Farm, 479 Lacy St, N. Andover, MA, 01845 or www.windrush.org or a charity of your choice.

The family of Attilio A. Capra created this Life Tributes page to make it easy to share your memories.