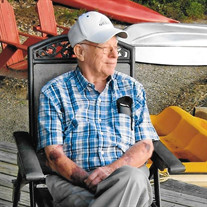 Arthur A. LeBrun, 88, died Saturday evening, August 20, 2016 at his home in Boxford surrounded by his loving family. He was the husband of Mary T. (Marcotte) LeBrun, with whom he shared 65 years of marriage. Born in Lynn on Jan. 20, 1928, he was the son of the late Arthur and Rose (Desrochers) LeBrun. He was raised and educated in Lynn and was a graduate of the former St. Jean Baptiste High School and Bentley College. A veteran of WWII, he served honorably in the U.S. Army. Arthur was employed for many years by the U.S. General Services Administration. A Lynn resident until 1972 when he and his family moved to Topsfield, he was a longtime director and treasurer of the St. Jean Credit Union. He sang in the St. Jean’s Choir, and served as business manager and an active volunteer at St. Rose of Lima Church in Topsfield for many years. He also volunteered with Senior Home Services and the Topsfield Council on Aging. He had made his home in Boxford for the last eight years. In addition to his wife, he leaves five children and their spouses, Steven and Lorraine LeBrun of Danvers, Karen and William Interbartolo of Rowley, Elisabeth and William O’Donnell of Hampton Falls, NH, Ann and Christopher Smolla of Amesbury, and Maryellen and Daniel Messina of Boxford, ten grandchildren, Jeffrey and Graig LeBrun, Danielle Rea, Elizabeth Staley, Joseph and Elise Pelletier, Zachary and Jakob Smolla, and Nicholas and Alexandria Messina, and eleven great-grandchildren. His Funeral Mass will be celebrated on Wednesday, August 24, 2016 at 9AM in Saint Rose of Lima Church, Park St., Topsfield. Burial will follow in Pine Grove Cemetery, Topsfield. Relatives and friends are invited. Visiting hours are Tuesday from 5-7PM in C.R. Lyons & Sons Funeral Directors, 28 Elm St., Danvers Square. In lieu of flowers, donations in Arthur’s name may be made to VNA Hospice Care, 100 Trade Center G-500, Woburn, MA 01801.

Arthur A. LeBrun, 88, died Saturday evening, August 20, 2016 at his home in Boxford surrounded by his loving family. He was the husband of Mary T. (Marcotte) LeBrun, with whom he shared 65 years of marriage. Born in Lynn on Jan. 20, 1928,... View Obituary & Service Information

The family of Arthur A. LeBrun created this Life Tributes page to make it easy to share your memories.