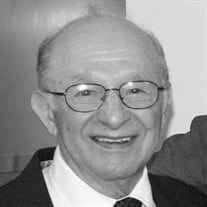 DANVERS- Arch T. Astolfi, 91, passed away on April 10, 2015 in Beverly Hospital. He was the loving husband of Eva (Berube) Astolfi, with whom he shared 65 years of marriage. Born on April 2, 1924 in Warren, Ohio, he was the son of the late John and Theresa (Liberatore) Astolfi. He was raised and educated in Ohio and graduated from Warren G. Harding High School in Warren and Ohio State University. He also received his Master’s degree from Northeastern University. Arch served his country during WWII with 69th Infantry Division of the United States Army and was honorably discharged. He moved to Danvers in 1950, where he was very active in the community. Arch was a Town Meeting member for over 27 years. He was also on the Planning Board for six years and served as Chairman. He was also very active in his church, Saint Mary of the Annunciation where he was a member of the Holy Name Society and the Knights of Columbus. He performed with the Paul Madore Chorale for many years. Arch had been employed with GTE Sylvania for 36 years as an industrial engineer until his retirement. He also enjoyed gardening, music and running, participating in local road races into his late 70s. In addition to his wife, he is survived by his five children, Mark Astolfi of Ogdensburg, NY, David Astolfi and his wife Cathy, Dr. Thomas Astolfi and his wife Judy, Suzanne Darrah and her husband Richard of Topsfield and Amy Lou Astolfi of Danvers, his sisters Rose Dixon and Helen Taneri, both of Ohio, seven grandchildren, three great grandchildren and many nieces and nephews. He was predeceased by his siblings, Josephine Crain, Matilda Fiorino and Vincent Astolfi. His Funeral Mass will be celebrated at 9AM on Friday, April 17, 2015 in Saint Mary of the Annunciation Church, 24 Conant St., Danvers. Burial will follow in Annunciation Cemetery, Danvers. Visiting hours are Thursday from 4-7PM at C.R. Lyons & Sons, Funeral Directors, 28 Elm St., Danvers. In lieu of flowers, donations may be made in his memory to the George Peabody Society, c/o The Peabody Institute Library, 15 Sylvan Street, Danvers, MA 01923 or the Danvers Community YMCA, 34 Pickering Street, Danvers, MA 01923.

DANVERS- Arch T. Astolfi, 91, passed away on April 10, 2015 in Beverly Hospital. He was the loving husband of Eva (Berube) Astolfi, with whom he shared 65 years of marriage. Born on April 2, 1924 in Warren, Ohio, he was the son of the late... View Obituary & Service Information

The family of Arch T. Astolfi created this Life Tributes page to make it easy to share your memories.