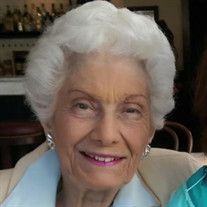 DANVERS- Antoinette “Toni” Theriault, 95, passed away surrounded by her family in her home on February 14, 2022. She was the wife of the late Louis Theriault with whom she shared 57 years of marriage. Born in Beverly on May 1, 1926, she was the daughter of the late Biagio and Louise (Marcos) Conti. Toni was raised and educated in Danvers and graduated from Holten High School. She had been a communicant of Saint Richard Parish. Toni was an active member of the Danvers community throughout her life. Prior to her marriage, she worked at the United Shoe and held several positions for local businesses in the Danvers area. In the 1970s she helped initiate the Danvers Environmental Action League which showcased her passion for preserving the Danvers community. She enjoyed many years participating in the Danvers Garden Club. Some of her notable accomplishments included achieving the level of Master Judge and designing award winning floral arrangements. Among many things, she was an artist. She had a lifelong appreciation for food, music, and art – as a singer she touched the hearts of many with her voice. Her dedication to music included pursuing singing on a professional level. She was known for having an excellent memory – never forgetting a birthday or an anniversary. She will never be forgotten by her friends, family, and community. Her example of being self-giving and caring continues to inspire those who knew her. She is survived by three daughters, Rosanne Tysz of Ohio, Roberta Theriault of Montana, and Elaine Theriault of Arizona, eight grandchildren, Michelle, Elizabeth, Daniel, Clare, Josh, Francis, John-Paul and Jessica-Rose and five great grandchildren, Gunnar, Magnus, Nicholas, Jackson and Presley and many nieces and nephews. She was predeceased by her brother, Henry Conti. Her Funeral Mass will be celebrated at 9AM on Saturday, February 19, 2022, in Saint Richard Church, 90 Forest St., Danvers. Burial will follow in Annunciation Cemetery, Danvers. Visitation will be held from 4 to 7PM on Friday, February 18, 2022, at C.R. Lyons & Sons, Funeral Directors, 28 Elm St., Danvers.

DANVERS- Antoinette &#8220;Toni&#8221; Theriault, 95, passed away surrounded by her family in her home on February 14, 2022. She was the wife of the late Louis Theriault with whom she shared 57 years of marriage. Born in Beverly on May 1,... View Obituary & Service Information

The family of Antoinette "Toni" Theriault created this Life Tributes page to make it easy to share your memories.