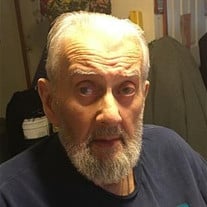 Anthony Richard “Tony” Munroe, age 80, passed away at home on March 12, 2017 after a brief illness. Born in Lynn on December 22, 1936 he was the son of the late Francis X. and Hannah K. Munroe. A lifelong Danvers resident, Anthony was very proud of the fact he lived in the family home where he grew up and he raised his family as well. Anthony served in the United States Marine Corps from 1953 to 1957. After his military service he worked as a commercial fisherman and as a machinist for many years at Sylvania in Salem. Tony then worked as a house manager for Lynn Human Services as well as the Northshore ARC. In retirement he kept busy working part time at the Peabody Institute Library in Danvers and was a proud member of the Essex County Detachment of the Marine Corps League. Anthony was a very active communicant of both St. Mary of the Annunciation and St. Richards Parishes in Danvers. Mr. Munroe was a longtime friend of Bill W. Anthony leaves behind Jeannine (Dube) Munroe, his wife of 58 years, his daughter Margaret Lyons and her husband Donald of Danvers, his son A. Gerard Munroe and his wife Maria of Beverly, and his grandchildren Andrew Lyons and his wife Jennifer of Lynn, Meghan Lyons of Lynn, Colleen Lyons of Pittsfield, Maine, Sean Lyons of Danvers, Adam Munroe of Beverly, Catherine Munroe of Beverly and his great- grandson Leo Lyons. He was predeceased by a brother, Francis T. Munroe and a grandson, Anthony T. Munroe. His Funeral Mass will be celebrated on Friday, March 17, 2017 at 9AM in Saint Richard Church, 90 Forest St., Danvers. Burial will follow in Annunciation Cemetery, Danvers. Relatives and friends are invited. Visiting hours are Thursday from 4-7PM in C.R. Lyons & Sons Funeral Directors, 28 Elm St., Danvers Square. In lieu of flowers, donations in Anthony’s name may be made to Care Dimensions, 75 Sylvan St., Danvers, MA 01923 or Saint Richard Parish, 90 Forest St., Danvers, MA 01923.

The family of Anthony R. Munroe created this Life Tributes page to make it easy to share your memories.

Anthony Richard “Tony” Munroe, age 80, passed away at home on...