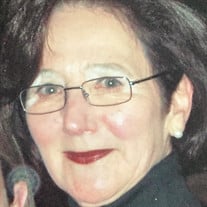 Anne M. (Maguire) Walfield, 77, died Tuesday, May 31, 2016 at her home in Danvers surrounded by her loving family. She was the wife of Wilbert H. “Will” Walfield of Danvers, with whom she shared 55 years of marriage. Born in Saugus on Oct. 30, 1938, she was the daughter of the late Robert and Winifred (Catalano) Maguire. She was raised and educated in Lynn, graduating from Saint Mary’s High School, and continued her education and graduated from the Catherine Labouré School of Nursing and Emmanuel College. Anne began her nursing career as a registered nurse at Union Hospital in Lynn. After several years, she took on the position of pediatric nurse in the office of Dr. William Wiswall in Peabody at which she spent more than thirty years. Her husband was the love and focus of her life. They were inseparable. She loved her dinner dates with her beloved Will at their favorite restaurants on the North Shore, weekends in Chatham, travel abroad. Anne was passionate about politics, loved watching her Boston Celtics and was extremely well read. A competitive Bridge player, Anne was a Gold Level Life Master in the game. Never wanting to be the center of attention, she adored family gatherings and was the biggest fan of her grandchildren—she never missed a sporting event or a theatrical production. Her perseverance, strength, loyalty, passion, guidance, and enthusiasm will be sorely missed. In addition to her husband, she leaves two sons and daughters-in-law, Steven and Mary Walfield of Danvers and Matthew and Carolyn Walfield of Essex, her brother, James Maguire of Westminster, and her six grandchildren, Annie Cundiff and her husband Michael of Burlington, and Will, Brendan, Thomas, Katie, and Lilly, all of Danvers. Her Funeral Mass will be celebrated on Saturday, June 4, 2016 at 10AM in Saint Richard Church, 90 Forest St., Danvers. Burial will follow in Walnut Grove Cemetery, Danvers. Relatives and friends are invited. Visiting hours are Friday from 4-8PM in C.R. Lyons & Sons Funeral Directors, 28 Elm St., Danvers Square. In lieu of flowers, donations in Anne’s name may be made to the Joslin Diabetes Center, 1 Joslin Pl., Boston, 02215.

The family of Anne M. Walfield created this Life Tributes page to make it easy to share your memories.