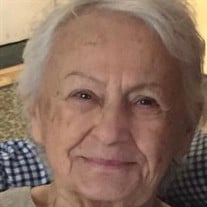 Ann M. (Cyr) Michaud, 80, died Wednesday, August 8, 2018 peacefully, surrounded by her family. She was the wife of the late Norman J. Michaud, who predeceased her less than two months ago, on June 18, 2018. Born in Salem on March 4, 1938, she was the daughter of the late Francis and Juliette (Caron) Cyr. She was raised and educated in Salem, graduating from the former Ste. Chretienne Academy. She was employed at Peabody High School for several years as an administrative assistant, where she loved the work and being around young people. A lifelong Salem resident, she was a three-time champion of the City’s Window Box and Traffic Island Competition judged by the Salem Garden Club. She leaves three loving children, Shawn Michaud of Bonita Springs, FL, Todd Michaud and his wife Deborah of Danvers—her loving daughter-in-law who cared for her in so many ways, and Tara Bean and her husband Fred of Avilla, IN, four grandchildren, Desiree Bena and her husband Andri, Dominique Michaud, Derick Bean, andEdward Bean and his wife Mina, a great-grandson, Freddy, and two sisters, Patricia Hayward of Lynn and Geraldine Frost of Lynnfield. Visiting hours for both Ann and her late husband, Norman, will begin on Tuesday, August 14, 2018 at 5PM and will conclude with a Prayer Service at 7:30PM in C.R. Lyons & Sons Funeral Directors, 28 Elm St., Danvers Square. All other services are private. In lieu of flowers, donations in Ann’s name may be made to Care Dimensions, 75 Sylvan St., Danvers, MA 01923.

The family of Ann M. Michaud created this Life Tributes page to make it easy to share your memories.