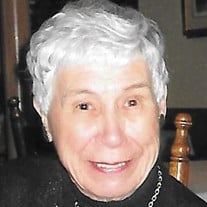 DANVERS- Ann E. (Cullity) Demers, 86, passed away on March 3, 2018 in Sturdy Hospital in Attleboro. She was the loving wife of Albert J. Demers, with whom she would have celebrated 61 years of marriage this April. Born in Hamilton on February 8, 1932, she was the daughter of the late Joseph J. and Helena A. (Murray) Cullity. She grew up in Hamilton and graduated from Hamilton High School. After marrying Albert, they moved to Danvers, MA where they raised their 3 sons and lived for over 49 years. She spent many years as an administrative assistant at Danvers high school as well as with Ardiff & Morse Attorneys at law. Later on she spent many years volunteering at the Danvers food pantry. Ann was a devote Catholic and was active in Saint Mary of the Annunciation women's Sodality group and was selected to be its Prefect for a year. Ann loved singing in the Saint Alphonsus church choir– their Christmas concerts were remarkable! She was very active in all aspects of the North Shore Players theater group. She also enjoyed painting and dancing. In addition to her husband she is survived by her three sons and daughters-in-law, Paul and Patricia Demers of Milton, Peter and Kerry Demers of Norton and Mark and Angela Demers of Atlanta, GA, a brother, Charles Cullity of Venice, FL and five grandchildren, Mike, Ben and Sean Demers and Dan and Laura Demers and several nieces and nephews. She was predeceased by her siblings, Marylou Plaze, Rita Purrington, Jean Andrews, John Cullity, Ruth Smith and Grace Armstrong. Her Funeral Mass will be celebrated at 9AM on Friday, March 9, 2018 in Saint Mary of the Annunciation Church, 24 Conant St., Danvers. Burial will follow in Annunciation Cemetery, Danvers. Visiting hours will be held on Thursday from 4-7PM at C.R. Lyons & Sons, Funeral Directors, 28 Elm St., Danvers. In lieu of flowers donations may be made in Ann’s name to the Plummer Youth Promise of Salem (formally Plummer Home for Boys) https://plummeryouthpromise.org/

DANVERS- Ann E. (Cullity) Demers, 86, passed away on March 3, 2018 in Sturdy Hospital in Attleboro. She was the loving wife of Albert J. Demers, with whom she would have celebrated 61 years of marriage this April. Born in Hamilton on February... View Obituary & Service Information

The family of Ann E. Demers created this Life Tributes page to make it easy to share your memories.