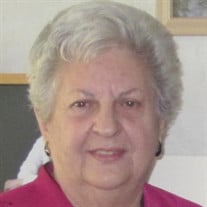 DANVERS- Ann R. (Alfano) Colarusso, 86, passed away surrounded by her family on February 10, 2019 in her home. She was the loving wife of Augustine Colarusso with whom he shared 63 years of marriage. Born in East Boston on July 26, 1932, she was the daughter of the late Alfonse and Rosina (Romano) Alfano. She was raised and educated in East Boston and graduated from East Boston High School in 1949. Ann moved to Danvers in 1960, where she and Augy raised their family. She enjoyed traveling with her husband and spending winters in Biloxi, MS. Ann was a devoted wife, mother, grandmother and great grandmother. She was committed to providing a loving and warm home for her family. Ann was extremely proud of all her children’s and grandchildren’s endeavors. In addition to her husband, Augy, she is survived by her children, Karen Karademos and her husband, John of Danvers, Patti O’Keefe and her husband, Mike of Peabody, Steven Colarusso and his wife, Judy of Danvers and Lisa Lake of Danvers and her fiancé Bob Day, her siblings, Armando Alfano of ME and Joann Maylor of Danvers and her grandchildren, Amanda Lake, Greg Karademos, Ali Colarusso and her fiancé Steve DiGiuseppe, Kristen O’Keefe, Brian O’Keefe and his wife, Michelle O’Keefe, a great granddaughter, Maggie O’Keefe and many nieces and nephews. She was predeceased by her grandson, Nicholas Colarusso and her brothers, Louis, Dominic and Al Alfano. Her Funeral Mass will be celebrated at 9AM on Friday, February 15, 2019 in Saint Richard Church, 90 Forest St., Danvers. Burial will follow in Annunciation Cemetery, Danvers. Visitation will be held from 4-7PM on Thursday, February 14, 2019 at C.R. Lyons & Sons, Funeral Directors, 28 Elm St., Danvers. In lieu of flowers, donations may be made in Ann’s memory to the Danvers People-to-People Food Pantry, PO Box 2076, Danvers, MA, 01923.

DANVERS- Ann R. (Alfano) Colarusso, 86, passed away surrounded by her family on February 10, 2019 in her home. She was the loving wife of Augustine Colarusso with whom he shared 63 years of marriage. Born in East Boston on July 26, 1932,... View Obituary & Service Information

The family of Ann R. Colarusso created this Life Tributes page to make it easy to share your memories.