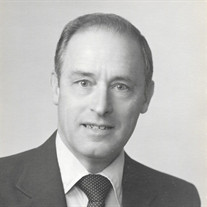 DANVERS- Alton N. Jones, Jr., 87, passed away on April 12, 2016 in Salem Hospital. He was the loving husband of Betty (Mead) Jones with whom he shared 62 years of marriage. Born in Lynn on May 22, 1928, he was the son of the late Alton and Doris (Potter) Jones. He was raised and educated in Danvers and graduated from Holten High School in 1946. Alton served his country on the U.S.S. Wisconsin with the United Sates Navy during WWII and was honorably discharged. He went on to Franklin Technical Institute for his associate’s degree. He had been employed as the Manager of Field Relay Service for the New England Power Company, where he retired after 41 years. Alton was active within his community and was the coach and past president for Danvers Youth Hockey as well as Danvers National Baseball. In addition to his wife, Betty, he is survived by his two sons and daughters-in-law, Gary and Patty Jones of Danvers and Mark and Ann Jones of Danvers, three grandchildren, Elizabeth Jones and her fiancé Casey Driscoll, Justin Jones and his wife, Caitie Jones and Sydney Jones, his great grandson Donovan and a brother-in-law, Donald Netzley of Ohio. He was predeceased by his sister, Louise Netzley. Alton’s Funeral Services were held privately at the request of the family. Expressions of sympathy may be made in Alton’s name to Parkinson's Disease Foundation, 1359 Broadway, Suite 1509, New York, NY 10018 or St. Jude Children’s Research Hospital, 501 St Jude Pl, Memphis, TN 38105.

The family of Alton N. Jones, Jr. created this Life Tributes page to make it easy to share your memories.