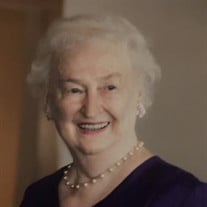 DANVERS- Alma (Farren) Rothwell, 90, passed away on March 11, 2018 in Beth Israel Deaconess Hospital. She was the wife of the late Ernest J. Rothwell. Born in Boston on September 24, 1927, she was the daughter of the late Robert and Agnes (Monahan) Farren. She was raised and educated in Revere and graduated from Revere High School. Alma had been employed with Calitri’s restaurant when they first opened and the former Deer Skin Trading Post and Suburban Gift Store. More recently she had been the assistant to the town clerk in Danvers. She had been one of the original communicants at Saint Richard Parish. Alma was extremely active and enjoyed many hobbies including, computer programming, knitting, reading and crossword puzzles. She was also a member of several bowling leagues and loved the ocean. She is survived by six children, Stephen Rothwell of Atkinson, NH and his fiance Martha Lupo, Pamela Rothwell of AZ and her fiancé Mark Flynn, Christine Rothwell of Newburyport, Marie Keane and her husband, Martin of Atkinson NH, Janet Arsenault and her husband, David of Beverly and Matthew Rothwell and his wife, Lauren of Atkinson, NH, her sister, Muriel Merullo of Peabody, nine grandchildren, Jessica Rothwell and her fiancé Tony Molea, Brendan Keane and his partner Krista Sulfaro, Thomas and Jonathan Keane, Matthew Arsenault, Ryan , Nicole , Caitlin and Tori Rothwell and a great grandson, Keagan. She was predeceased by her brother Robert “Buddy” Farren. Her Funeral Mass will be celebrated at 11AM on Friday, March 16, 2018 in Saint Richard Parish, 90 Forest St., Danvers. Visitation will be held prior to the Mass on Friday morning from 9AM-10:45AM at C.R. Lyons & Sons, Funeral Directors, 28 Elm St., Danvers. Burial is private. In lieu of flowers, donations may be made in Alma’s name to Compassionate Care ALS CCALS 752 W. Falmouth Highway, Falmouth, MA, 02540.

DANVERS- Alma (Farren) Rothwell, 90, passed away on March 11, 2018 in Beth Israel Deaconess Hospital. She was the wife of the late Ernest J. Rothwell. Born in Boston on September 24, 1927, she was the daughter of the late Robert... View Obituary & Service Information

The family of Alma Rothwell created this Life Tributes page to make it easy to share your memories.