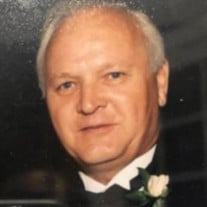 DANVERS- Alfred L. “Al” Charland, 84, passed away on July 16, 2020. He was the loving husband of Marilyn (Goday) Charland with whom he shared 62 years of marriage. Born in Beverly on September 9, 1935, he was the son of the late Alfred and Theresa (Hickey) Charland. Al was raised and educated in Salem and had spent the past 62 years in Danvers. Al served his country with the United States Army and was honorably discharged. He had been the owner and operator of Charland Appliance for over 50 years. Al was and outdoorsman and enjoyed fishing and hunting. In addition to his wife, Marilyn, he is survived by five children, Faith Spaneas of Danvers, Mark Charland and his wife, Kim of Seabrook, NH, Brian Charland and his wife Grace of Lebanon, ME, Michael Charland and his wife Kristin Sayer of Seabrook, NH and Lisa Durand and her husband, David of Rowley, his siblings, Ronald Charland of FL and Eskie Tarnowski of Salem, his grandchildren, Gregory Spanaes, Eric, Alexis and Alexander Charland, Bryan Charland, Nicholas Charland, Brianna Darisse and Gabriella Durand and three great grandchildren, Gregory, Niko and Brannon. He was predeceased by his sister, Faith Fergnani. Al’s funeral service will be held privately. In lieu of flowers donations may be made in his name to the Alzheimer’s Assoc. 309 Waverley Oaks Rd, Waltham, MA, 02452.

The family of Alfred L. Charland created this Life Tributes page to make it easy to share your memories.