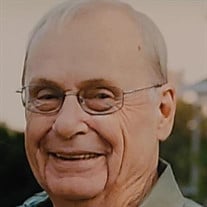 BOXFORD- Alden Prescott Clark, 83, passed away on February 4, 2021 in Winchester Hospital. He was the husband of the late Marianne (McKenney) Clark. Born in Peabody on September 5, 1937, he was the son of the late Prescott Clark and Helen (Doliber) (Clark) Knight and the step-son of the late Helen (Filipiak) (LeBlanc) Clark. He was raised in Danvers and Marblehead. He had served our country with the United States Navy and was honorably discharged. Alden owned and operated Auto Industrial Machine in Danvers for over 30 years. For over 15 years, he was the Council of Aging’s go-to person. He delivered meals on wheels, took seniors to medical appointments for NEET. Alden was a handyman, doing small fix-it jobs for seniors, manned the BBQ grill during summer outings and was always available when the Council on Aging needed help. Alden made many friends and was well known and respected in the senior community. He is survived by his children, Beth Bartosiewicz and her husband, Gary of Manchester, NH, Sue Clark and her wife, Kate Brant of Boxford and Andrew Clark and his wife, Tonya of Kingston, NH, his grandchildren, Caitlin and Adam Clark, his brothers, Allan Clark of VA, John LeBlanc and his wife, Jean of Danvers and Lester LeBlanc of Danvers, his former wife, Patricia Davenport of Rowley and several nieces and nephews. He was predeceased by his sister Marilyn Strout. Visitation will be held from 4-6PM on Tuesday, February 9, 2021 at C.R. Lyons & Sons, Funeral Directors, 28 Elm St., Danvers. Attendees are requires to wear face coverings, practice social distancing, and are respectfully asked for no physical contact with the family. All other services are private. In lieu of flowers donations may be made in Alden’s name to the Town of Boxford c/o the Council on Aging, 4 Middleton Rd, Boxford, MA 01921 or the American Lung Assoc. at www.lung.org.

BOXFORD- Alden Prescott Clark, 83, passed away on February 4, 2021 in Winchester Hospital. He was the husband of the late Marianne (McKenney) Clark. Born in Peabody on September 5, 1937, he was the son of the late Prescott Clark and Helen... View Obituary & Service Information

The family of Alden Prescott Clark created this Life Tributes page to make it easy to share your memories.