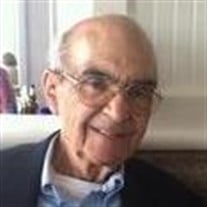 DANVERS - Albert J. Demers, 89, passed away peacefully in his sleep on May 27, 2019 in Norton. He was predeceased by his loving wife Ann (Cullity) of 60 years. Born in Central Falls, RI on May 8, 1930, he was the son of the late Albert and Germaine Demers. He grew up in Pawtucket, RI and Needham, MA, graduated from Needham High School and Burdett College with an Associate Degree in Business Administration. Al served our country enlisting in the Navy and serving onboard the USS Charles S. Sperry (DD-697). Al was honorably discharged in 1949 and went on to serve in the Naval Reserves until 1958. After marrying Ann, they lived briefly in Medway, MA before moving to Danvers, MA where they raised their three sons and lived for over 49 years. Most of his career was spent as a Credit Manager including the last 25 years for Simon Saw and Steel in Fitchburg, MA. After retirement, he spent time volunteering with Meals on Wheels and gardening. Al was a devoted Catholic and loved singing in the Saint Mary of the Annunciation church choir and at the former Saint Alphonsus’ Church – their Christmas concerts were remarkable! He was very active in all aspects of the North Shore Players theater group – both acting and directing several productions. He was an avid reader and passionate Red Sox and Patriots fan. He also enjoyed dancing, bowling, and spending time with his grandchildren. He is survived by his three sons and daughters-in-law, Paul and Patricia Demers of Milton, Peter and Kerry Demers of Norton and Mark and Angela Demers of Atlanta, GA, a brother, Robert Demers of Mattapoisett, MA and five grandchildren, Michael, Benjamin and Sean Demers and Daniel and Laura Demers and numerous nieces and nephews. His Funeral Mass will be celebrated at 9AM on Friday, June 7, 2019 in Saint Mary of the Annunciation Church, 24 Conant St., Danvers. Burial will follow in Annunciation Cemetery, Danvers. Visiting hours will be held on Thursday June 6, 2019 from 4-7PM at C.R. Lyons & Sons, Funeral Directors, 28 Elm St., Danvers. In lieu of flowers donations may be made in Al’s name to Plummer Youth Promise of Salem at https://plummeryouthpromise.org/get-involved/make-a-donation/ or at: Plummer Youth Promise, 37 Winter Island Rd, Salem, MA 01970.

DANVERS - Albert J. Demers, 89, passed away peacefully in his sleep on May 27, 2019 in Norton. He was predeceased by his loving wife Ann (Cullity) of 60 years. Born in Central Falls, RI on May 8, 1930, he was the son of the late Albert and... View Obituary & Service Information

The family of Albert J. Demers created this Life Tributes page to make it easy to share your memories.

DANVERS - Albert J. Demers, 89, passed away peacefully in his...