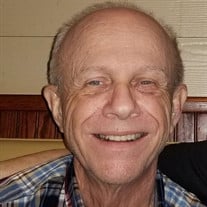 Alan J. Frost, 73, of Peabody, died Sunday morning, December 30, 2018 at the Kaplan Family Hospice House. He was the loving husband of Mildred (Williams) Frost, with whom he shared nearly fifty-two years of marriage. Born in Danvers on May 15, 1945, he was the son of Laurence and Frances (Freeman) Frost. He was raised and educated in Danvers and was a graduate of Danvers High School, Class of 1964. He went on to graduate from the Mass Trade Shop School in Boston. Alan served honorably in the U.S. Navy during the Vietnam War. A machinist by trade, he worked several years as a machinist before being employed by the Town of Danvers for several years. He then spent more than thirty years in plant operations at the Greenery Nursing Home and Beverly Nursing & Rehab. He was a proud American who loved spending time with family and helping others, especially advocating for homeless veterans. He was devoted to his cats, especially Abby, Stephie, and Zoe. In addition to his wife, he leaves his adopted daughter, Amy Thompson and her husband William of Danvers, as well as extended family and many friends. He was predeceased by his mother and father-in-law, Howard and Evelyn Williams. Alan’s family is grateful for the skilled and dedicated care he received from the Care Dimensions staff during his illness. His Funeral Service will be held on Thursday, January 3, 2019 at 11AM in C.R. Lyons & Sons Funeral Directors, 28 Elm St., Danvers. Burial will follow in Wadsworth Cemetery, Danvers. Relatives and friends are invited. Visitation is prior to the service from 9:30AM-10:45AM. In lieu of flowers, donations may be made to the Disabled American Veterans, JFK Fed Bldg., Government Ctr., Boston, MA 02203.

Alan J. Frost, 73, of Peabody, died Sunday morning, December 30, 2018 at the Kaplan Family Hospice House. He was the loving husband of Mildred (Williams) Frost, with whom he shared nearly fifty-two years of marriage. Born in Danvers on May... View Obituary & Service Information

The family of Alan J. Frost created this Life Tributes page to make it easy to share your memories.